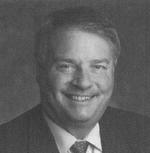 As Regional Director of State Government Relations for Wells Fargo & Co., Dave Howell coordinates the Bank's government relations activities in eight western states. Before joining Wells Fargo in 2003, Mr. Howell was Vice President of Marketing & Communications for Thunderbird, The American Graduate School of International Management. His professional career has also included corporate affairs at other financial services institutions and twenty years in broadcast journalism. Mr. Howell earned both his bachelor's and master's degrees in journalism at the Medill School of Journalism at Northwestern University in Evanston, Illinois.