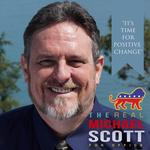 Michael Scott has been involved in television and film production dating back to the 80’s. Michael has produced, directed, and written numerous productions. His love for meaningful media lead him to create “Project Positive Change”, a nonprofit organization that evolved from the love of many coming together to create positive change. Project PC strives to create positive change through media and education. Several years ago Michael was confronted with a life threatening illness. Out of this hardship, Michael reconfirmed his commitment towards helping his community through positive change. As Michael healed he continued his efforts supporting many local philanthropy driven organizations he is a member of; such as The American Legion, Stanwood Eagles, Moose Lodge and several others. Part of Michael’s research for better health and his love for his community lead Michael to understand that to make positive change he also needed to include political participation, so he looked for ways to help. In 2014, Michael joined the Washington State Libertarian party, becoming one of 12 candidates that ran for State Legislative office. Michael was successful in received near 24% of the vote in the general election that year, gaining support from those in his communities, so much so that this year Michael received over 27% in the 2016 year's primary and Michal successfully received over 28% of the vote in the 2016 general election. Michael has spent countless hour at our states capitol, lobbying, testifying, interacting with our state and local political leaders, learning, starving for positive change. Besides finding Michael involved in the political process you can find him speaking through the year at various venues where he inspires folks to stand-up, step-up, and speak-up to create the positive change that we wish to see.