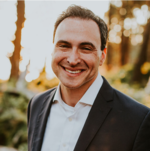 Ross Cohen serves as the Washington State Director at SiX. Before joining SiX, he was a campaign manager for multiple progressive efforts in Washington state, led the grassroots effort to engage veterans and military family members for Hillary for America, was an Executive Director with JPMorgan Chase’s Veteran Jobs Mission, the Executive Director of the U.S. Chamber of Commerce Foundation’s Hiring Our Heroes initiative, Director of the ServiceNation coalition’s civilian-military initiative, and on Presidential, Congressional, and Gubernatorial campaigns. Ross also served as an enlisted paratrooper in the Army, with one deployment to Afghanistan. He is a graduate of Princeton University’s Woodrow Wilson School of Public and International Affairs and of Brown University, where he earned a Bachelor Degree, focusing on Russian and Soviet history. He lives with his fiancé in Seattle.