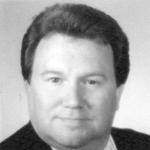 Born in Port Angeles, WA. After graduating from Crescent Consolidated High School, he joined the United States Army. He served for eight years. Was assigned to Viet Nam twice, and served in Korea and Europe. Upon his discharge, he served as a Drivers License Examiner and in various administrative positions at the Department of Motor Vehicles. He went to work at the Washington Trucking Associations in 1976, where he held positions of increasing responsibility, culminating with the appointment as Executive Vice President of the Washington Trucking Associations in September of 1991. Mr. Pursley is married and resides in Olympia, WA.