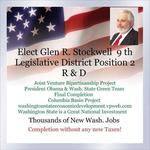 Glen R Stockwell has spent a lifetime promoting "Bipartisan Fast Track Completion of the Columbia Basin Project and expansion of our WA Ports". He has just recently received authorization from the IRS for his 501 3C NP.